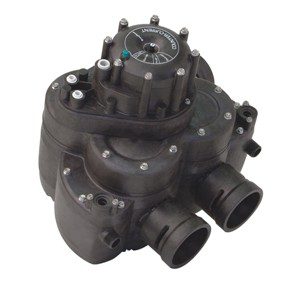 works through as an adsorption medium. When the carbon has been saturated with contaminants, it will need to be replaced with new carbon. The typical STULZ application will utilize a 10 x 54 Dechlorinator, which will employ an upflow configuration. This eliminates the need for a backwash cycle and allows for non-electric operation. Kinetico would recommend that the carbon be replaced at least once per year. Backwashable carbon filters are available in applications where sedimentation is high in the incoming water supply.

Filtration is the method of removing sediment particles from water by passing through various media. Media can be sand, filter Ag, carbon, ceramic, paper, spun wound fibers, and fabric. There is a multitude of other filtration media available. Filtration effectiveness usually ranges between 100 microns to 0.1 microns depending on media and method selected. Typical filtration for STULZ applications is provided by an interchangeable cartridge filter. This filter is rated to a 5 microns nominal removal (meaning 80% of the contaminants 5 micron or larger will be trapped on filter surface) and is of the pleated fabric type.

Softening is the method of removing magnesium and calcium salts from water using an ion exchange process. As water passes through a column of selective cation resin, magnesium and calcium ions are removed and exchanged for a chemically equivalent amount of sodium ions. The cation resin is regenerated with sodium chlorides. STULZ applications will utilize Kinetico’s unique non-electric valve. This valve incorporates an automatic, demand-initiated regeneration technology and duplex media tanks ensuring an uninterrupted supply of treated water. 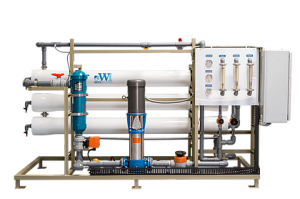 Reverse Osmosis (RO) was the first crossflow membrane separation process to be widely commercialized. RO removes virtually all organic compounds and 90 to 99 percent of all ions. A large selection of reverse osmosis membranes is available to meet varying rejection requirements. RO can meet most water standards with a single-pass system and higher standards with a double-pass system. RO rejects 99.9 percent of viruses, bacteria, and pyrogens. Pressure, on the order of 200 to 1,000 psig (13.8 to 68.9 bar), is the driving force of the RO purification process.

Deionization is a method used for the removal of all ionized organic and inorganic minerals and salts from water, using a two-phase ion exchange procedure. First, the positively charged ions are removed by cation exchange resin in exchange for a chemically equivalent amount of hydrogen ions. Second, negatively charged ions are removed by anion exchange for a chemically equivalent amount of hydroxide ions. The hydrogen and hydroxide ions introduced in this process unite to form deionized water molecules (this process may also be termed demineralization).

Ultraviolet Disinfection is the utilization of ultraviolet wavelengths to sterilize water. Ultraviolet disinfection requires water that is virtually free of sediment and calcium or magnesium salts.

Distillation is the process by which a liquid, such as water; is converted into a vapor state by heating; then the vapor is cooled and condensed to the liquid state and collected. Distillation is used to remove dissolved solids and other impurities from water. Multiple distillations are required to produce the mineral free quality water that is routinely produced from a deionization process.

The last question to be addressed is sterilization by distillation. Sterilization is a process by which living organisms are destroyed. Sterilization is achieved in distilled water by use of the heat used in the distillation process. Deionized water is sterilized by use of an ultraviolet light. The ultraviolet light is used to kill living organisms that escape the chlorine used in the feed water. This does not mean either of these waters is considered sterile. In order to produce sterile water either of these waters must be exposed to some additional form of sterilization such as autoclaving the product.

Water Innovations offers several water treatment technologies, unique in the industry, for virtually any water quality concern. Please contact us at 760-294-1888 or sales@waterinnovations.net